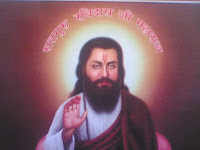 Guru Ravidas was born in a village called Kanshi (Banara), in the north Indian state of Uttar Pradesh in 1376. His father, Baba Santokh Dass Ji belonged to a lower caste and the family was consisdered untouchable.There is not much known about his early life, he became well known and prominent because he motivated the poor people to challenge the discrimination they faced from the so called upper class especially brahmins and asked them to fight against the practice of untouchability. He taught the lessons of universal brotherhood, tolerance and equality of all castes.


He is worshipped in all the Gurdwaras, there is an Akhand Path, the Nishan Sahib is changed ceremonially and there
is a special Arti. A Nagar Kirtan procession is carried out, people dressed up like Ravidas and his associates, bearing his portrait and accompanied by music pass through the streets of the locality.
Created on : 19th November 2012
Created by : Archana
प्रस्तुतकर्ता Unknown पर रविवार, नवंबर 20, 2011